Happy New Year! And welcome to The Down Under TV Place, where you’ll find info about programs from Australia and New Zealand premiering, airing, and streaming in the US. 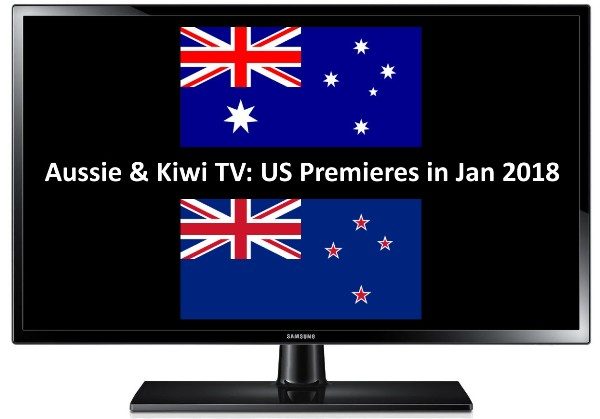 Double-award winner Mark Mitchinson (The Shannara Chronicles, Nothing Trivial, True Crime) stars in this biopic series as Mike Bungay QC, the larger-than-life barrister once described as New Zealand’s best-known criminal defense lawyer. A unique and flawed rogue, Bungay did what was necessary and occasionally impossible to defend his clients.

Based on the book of the same name by his widow Ronda Bungay (née Morgan, played by Sally Stockwell, The Insiders Guide to Happiness), the five-part series spans several decades and chronicles the good and evil, rights and wrongs, and strengths and flaws of Bungay — one of the most flamboyant and infamous characters in New Zealand’s legal history.

Produced by Screentime (Wolf Creek) and featuring Erroll Shand (Harry) and Emmett Skilton (The Almighty Johnsons), Dear Murderer premieres in the US on Monday, January 22nd, exclusively on Acorn TV.

His fascination with the human body’s ability to adapt and thrive in extreme scenarios has him using the power of biochemical research and traveling to various parts of the world to put his own body to the test.

To unlock the secrets of extraordinary individuals who survive against the odds, Sampson explores the nature of endurance, fear, resilience, pain, diet, and risk-taking by immersing himself in situations that require all of the above and then some.

These include living as a hunter-gatherer with the Hadza tribe in Tanzania, taking on the dangerous job of Bollywood stuntman, training with the legendary French Foreign Legion deep in the Amazon jungle, confronting his fear of water to free-dive with the Bajau people in Malaysian Borneo, and climbing as a Himalayan Sherpa to 6000 meters above sea level.

Body Hack begins its US broadcast premiere on the public TV stations and regional networks listed below, starting January 1st. Air dates and times vary by market, so check your local listings or contact the station that serves your area for details. If you’d like to watch Body Hack but your station isn’t on the list, contact its Viewer Services department or American Public Television.