“Do you come from a land down under…”

The Aussie band Men at Work may have created one of the most memorable songs in the early ’80s, prompting millions of listeners to wonder what vegemite is, but it’s TV shows from Australia and New Zealand that have been capturing the attention of the American viewing public, particularly in the past five years. 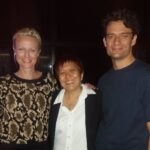 From addictive dramas like A Place to Call home, to award-winning dramedies such as Offspring and Rake, to binge-worthy whodunits like The Brokenwood Mysteries (and the now-completed The Doctor Blake Mysteries and Miss Fisher’s Murder Mysteries), these programs have brought the beauty, great storytelling, and dare I say quirkiness of Down Under to lands north of the equator and made fans of millions.

At the end of 2017, there were more than 150 Aussie and Kiwi shows available in the US, and more are coming. And news about them deserves to be covered on a blog of their own.

So voilà! Here we are!

Linda Jew
Founder, The Down Under TV Place

P.S. The British TV Place continues to provide coverage about programs from the UK, Canada, and Ireland, and fans of original-language, English-subtitled shows from Europe will still find information about these titles at The Euro TV Place.